Ok now that title is a bit misleading as this trip was not primarily a fishing trip at all, it was a family holiday/wedding trip, yet I could not resist taking some kit along for the odd session.
I didn't hit it hard like I do when I am fishing abroad with Scott, in fact neither could I, both due to the busy schedule and family time which was awesome. The other facet was the heat, damn it was hot! Truthfully speaking I fished for maybe three to four hours each time because as soon as the sun rose it was both dead and too hot to do anything but swim in the pool or sea.

That being said I did have the odd session and was truly surprised at how hard it was out there! It certainly was not the bite per cast I am used to abroad, even from of the small fish.
Admittedly I did not want to spend my time catching lots of small bream and stuff again, so this time I took no gulp at all, just proper lures. I also tried to use plugs and jigs a great deal of the time in order to try and find some predators, I did however use small softs at times just to save a blank!

My sessions mainly were on Agia Paraskevi beach and fishing west to Poros area.
My first fish however was caught on the Kolios end of Agia Paraskevi and fell to the ever successful Aquawave Ami rigged dropshot; a Cleaver Wrasse, a small but true delight! 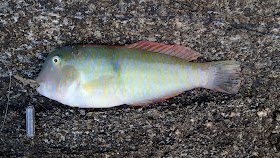 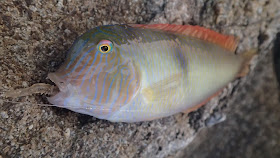 I had really wanted to catch one of these since I saw Scott's in Madeira, they are such a stunning looking thing and prove quite difficult due to their tiny mouths. I had not banked on being bitten three time by it after landing though!
This was the only fish caught that morning despite the multiple bites and a brief encounter with some small Amberjack, I was truly shocked.

During the first week the tides were neap and building, interestingly during this time I saw multiple baitfish eruptions but despite many follows I failed to hook up once. I found this terribly frustrating and thought I would get there eventually, but actually failed. The second week from full moon onwards I barely saw a bait fish eruption! They would only happen between the first glimmer of light and about 8:30am and were infrequent at best. 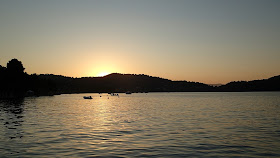 Often I would get bored and resort to dropshotting Ami's for mini stuff and I managed plenty of small bream, Rainbow Wrasse and Combers but this would become increasingly frustrating when I saw an eruption and wasn't rigged for it. I must admit to getting a bit down about it a couple of times but then just reminded myself that I am on holiday and it doesn't matter so much, I just enjoyed the scenery and catching whatever after a while. 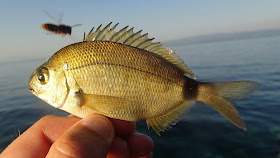 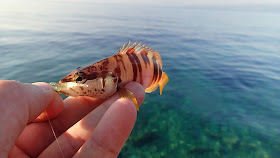 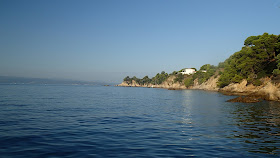 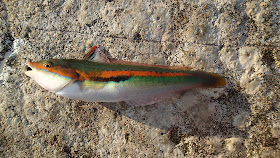 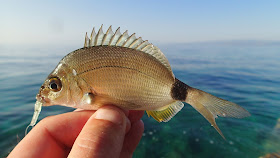 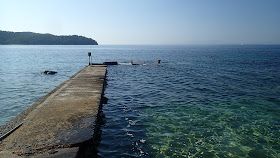 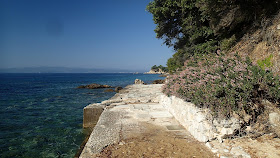 In the small Bream photo above you can see one of hundreds I had to put up with each morning I fished; wasps! It was unreal how plagued the place was with these beasts and seeing as I was the only one crazy to be out at stupid O'Clock, i received a lot of attention.

Talking of beasts, well one morning when I was out I actually got a good OTD take on an Evergreen 5g Javelin jig, but this felt strange as I pulled it from the gully I was fishing, when the thing stopped and stuck hard. I knew what it was somehow and as lines started steadily and unstoppably coming off my reel I thought I was going to lose this fight for sure. I employed the Wrasse trick i use at home and threw out loads of slack to see if the beast would swim free and surely enough this paid off. I was able to bully my capture to the surface and away from the rocks, here she is; 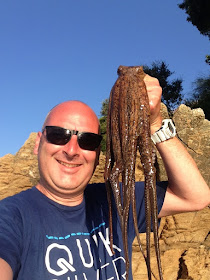 I was not popular with the locals for releasing it but I didn't know what on earth to do with it. The locals actually kill Octopus by biting them between the eyes then bashing them about 40 times on the rocks. You then wash them in the sea, bash them another 40 times before taking them home and washing it some more and hanging it out in the sun for a few days to tenderise the meat. Yep, releasing it was far easier!
I was pretty chuffed with my capture all the same as it is pretty unusual and certainly a first for me! 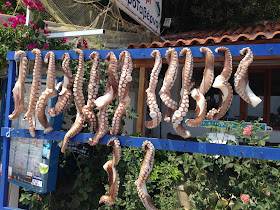 I will conclude part one on that note and start writing part two.